It’s time to recognize the February Zeal Credit Union Athletes of the month! Now more than ever we are grateful for a community that rallies around its athletes and its teams.

And a huge congratulations to Selena Vidojevski and Jake Vickers nominated from Canton High School this month, and for an awesome winter season. Go Chiefs!

If you voted in this month’s contest, you could win a $100 gift card courtesy of Zeal Credit Union. The winner will be announced in the next couple of weeks and will be notified via email. Check out Zeal CU on Facebook and Twitter! 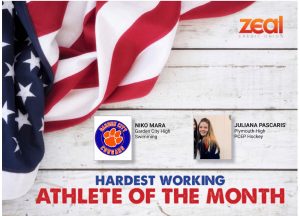